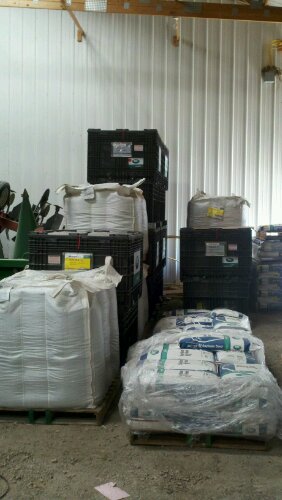 Seed beans sitting in the shed. We are currently waiting for some warmer weather and a nice rain before we put these seeds in the ground.

Our biggest surprise of the week. About 28 days ago this Hen took over our Malard Duck's nest of a few eggs and decided to hatch them on her own. She recently hatched these 4 Mallard Ducklings. 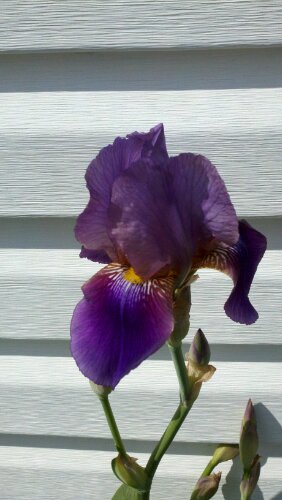 Our first Iris bloom of the season

A flower I can't kill!! This beautiful creation and others, made 100% from metal was created by Metals By Marla. Marla has made many creations, from Football team signs to life-size stalks of corn and everything in between. She even makes 100% custom designs. Check her out at http://www.metalsbymarla.com

Our newly designed seed tender. We mounted a seed conveyor on the side of our wagon, which will store seed beans untill its time to plant them. A hitch on the back of the planter allows me to tow the wagon to and from the field where I can load the planter with seed.

Loading our seed tender wagon with Soybean Seed for the first time in 2012. We arent planting yet, but are getting everything ready to go. 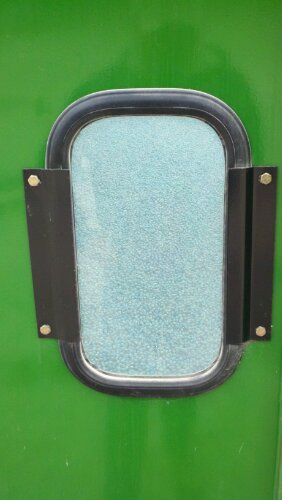 Seed beans inside our seed tender wagon. Yes, Soybeans are actually Yellow, however most Soybean Seed comes with a Crop Protectant applied to it to help give it a great start when planted. The blue color comes from a dye mixed in with the seed treatment. 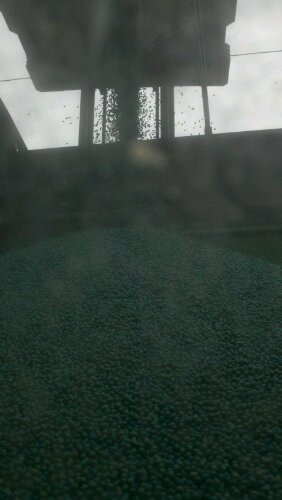 Soybean seed emptying from the seed box and filling our Seed tender. Each box contains enough seed to be planted over 50 acres.

This is our sprayer tender (nurse tanks). I am currently redesigning this tender to make it more efficient. In this pic it's currently under construction, by next weeks Friday Farm Flicks, it will hopefully be done.

A great sunset is developing!

Sitting idle, waiting for some warmer weather and rain to put moisture back in the ground before we begin planting soybeans.

Our first field of field corn (planted over a week ago) is beginning to emerge.

My little mans School Project. The goal was to make something, anything, out of 100% recycled materials. He wanted to make a Robot. A pizza box, 7 water bottles, a milk jug, a paper towel roll and a MC'ds drink holder later, we have a new life-size Robot complete with a bobble head and hat and he can stand on his own!

Farming Truly a way of Life. Thanks to Ranch House Designs for this pic. 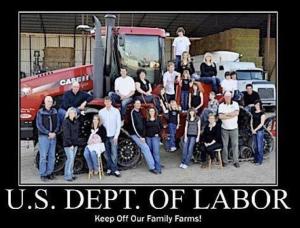 Yesterday, the Department of Labor backed down from creating legislation which would regulate what a Child (under 18) both could and couldn't do on their own and other Family Farms. If the DOL would have proceeded and passed the new regulations, a person under 16-18 years old would not be legally allowed to do even basic chores around their own farm. The DOL found much opposition on many fronts to their proposal and backed down yesterday.

This field was planted over a week ago. If you look closely you can see the Corn starting to emerge.

This week has proven to be an interesting one here at Boucher Farms.  New life has arrived in the form of Ducklings and Corn alike, proving Spring brings a new beginning.  Thank you for stopping by Off the Cobb and God Bless!

Any of you who know me well, knows that I have 3 main things in life which I love.  First and foremost, my Family, then Farming and Photography.  It may be reasonable to say my family is tired of me taking pictures of them, and I have also been accused of taking pictures of everything (Which I will admit to being at least a little guilty of).  Anyhow, I’ve decided to put those 3 loves of mine together in a (hopefully) weekly update to my blog called Friday Farm Flicks.   The pics I post will be mainly related to the farm, nature or other outdoors type things we have done either as a family, or on my own, throughout the week.  For the most part, each picture will have a brief explanation under it explaining what is going on in it and may even include a why as well.   From time to time I also may include some other pics I’ve found interesting which are taken by others, but proper credit will be given to them.  I hope you enjoy this as much as I will. Thank you!

Todays posted pics come from the last few weeks that lead up to and through the planting season.  Enjoy!

Prepping the planter for planting the 2012 Field Corn Crop 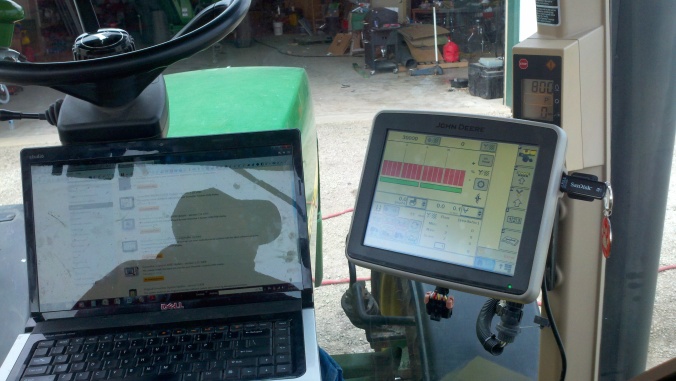 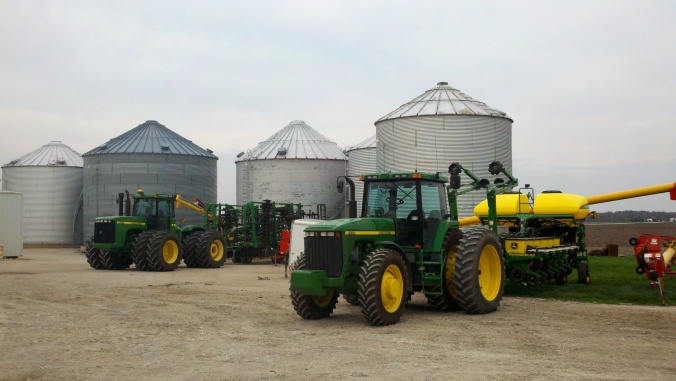 Patiently Waiting for Warmer Weather before Plant '12 can start 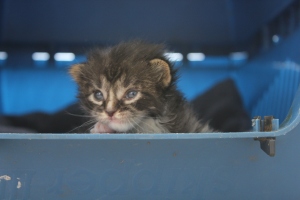 One of two kittens given to us my a neighbor. We are bottle feeding them because they lost their mother at 2 weeks old 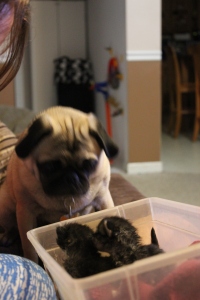 Our very Curiuos Pug, Copper, keepin a watchfull eye on the kittens, Cubbie and Sox 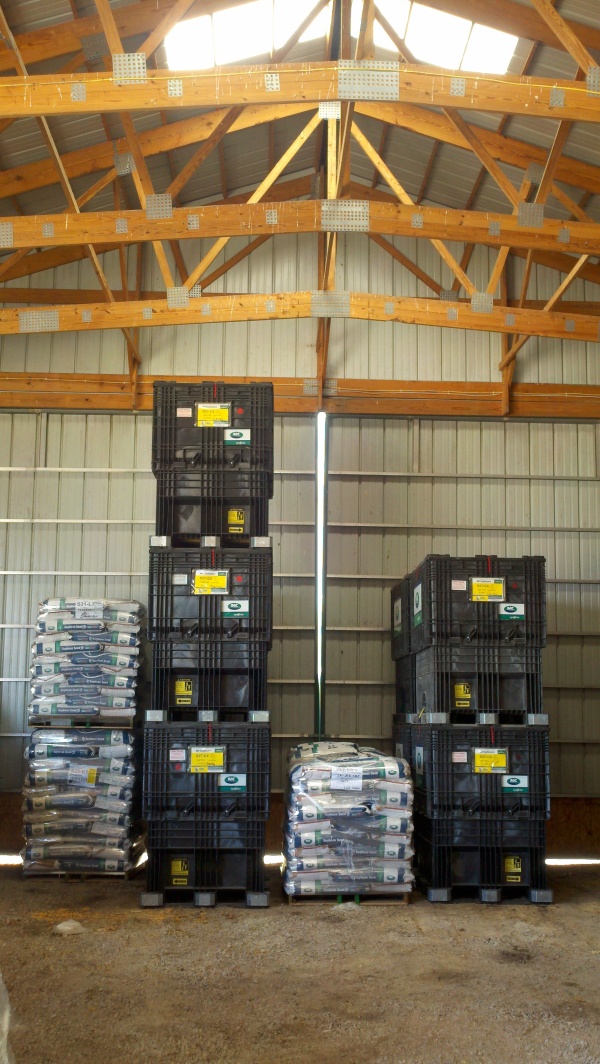 Seed orders sorted, stacked and ready to go. The Black Boxes contain enough soybean seed to be planted over 50 acres and are 100% reusable, therefore reducing the impact of paper packaging on the environment. 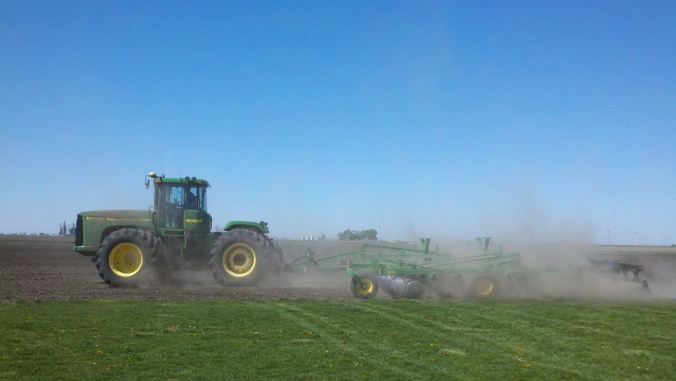 Leveling off the Chisel Plowed Ground to get it ready for planting. It's not normally this dusty, but things are really dry this year

Starting out planting in our first field for 2012. If all the planter (yellow) boxes were full (except for the large ones in the middle which we use for soybeans) we could plant over 50 acres on one fill of Seed Corn. If we were to fill the big boxes as well we could go another 230 acres (or 270 ac/fill) between fills.

Wrapping up planting in our last field of Field Corn for 2012 with my little helper. (hiding in the cab) 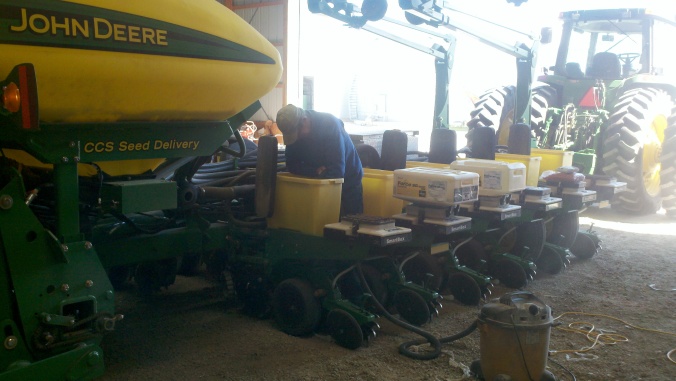 After completing Corn Planting for 2012, Dad is vaccuming out the planter so we can switch to planting our 1/2 acre of Sweet Corn.

Thank you for stopping by and checking out our pics.  Check back in the fridays to come for more!  Thank you and God Bless!

What would happen if you woke up one morning and couldn’t sign on your favorite social media site like Facebook, Twitter, Google+?   How would you feel?  How would you communicate with your friends?  How would it change your life?  Most importantly what would you learn from it?  That is exactly what happened to me.

For the last 2 years,  I have decided to give up Facebook Mobile on my phone for the Lenten time period of the 40 days before Easter.  Now while some of you may be laughing inside at the lack of relevance doing so has to everyday life, I’m sure the majority of you understand how not having mobile access to a major way of communication can affect you once you have already had it.

Did you know:   Over 700 Billion minutes a month are spent on Facebook, 20 million applications are installed per day and over 250 million people interact with Facebook from outside the official website on a monthly basis, across 2 million websites. Over 200 million people access Facebook via their mobile phone. 48% of young people said they now get their news through Facebook. Meanwhile, in just 20 minutes on Facebook over 1 million links are shared, 2 million friend requests are accepted and almost 3 million messages are sent.

Now, I didn’t give up FB entirely, I could still go on my computer and catch up with everyone later in the day, so it was really no big deal. Having said that, I decided to take giving up Facebook to the next level for this year by giving up Social Media Entirely for 7 days!  Check out my previous blog on the subject, Giving it Up.

For the 2012 Lenten season I decided to go on a week-long Social Media Detox.  The Social Media Detox consisted of 7 days of absolutely no Social Media, including Facebook (except for my farm Page) Boucher Farms, Google+, StumbleUpon, Twitter and more.  I also decided to give up Social Media based online games such as Scramble, Words With Friends, and more.   In order to eliminate the temptation of playing a game or signing on the sites, I simply deleted the apps from my phone.  As you can imagine, staying away from social media for a week wasnt the easiest thing to do, but I am proud to say I did it and learned a few things from it like:

So what are the lessons learned?

It’s easy to sit here, typing on my computer and state the lessons I learned, however as we all know actually living by them can be difficult.  So here’s my plan.

I plan on checking FB, Google+ etc in the mornings, and at night, after the kids go to bed.  This doesn’t mean I wont post a pic or two from my phone throughout the day and check a notification or two, from time to time, but it does mean I wont be on as much in the heart of the day.

“Letting it wait” has proven to save a lot of time which I can use to achieve other things in life including the most important thing, spending time with family.

I should add a note too,   I’m not against Facebook or other types of Social Media, in fact I believe they are a great communications tool which when correctly utilized has unlimited potential to bring people together and make the world a smaller and smaller place.  However, it does have some side effects like pulling the Social Media contributor away from the people who are around them, physically.  Achieving the balance of the two is the challenge.

As the old saying goes…”Everything in Moderation”

Thank you for reading, and God Bless!